Thank you for using Canon products.

In rare cases, the AF function on some PowerShot IXUS 175 / ELPH 180 / IXUS 177 compact digital cameras may not operate properly and focus may not be achieved. Customer support for this phenomenon is described below.

We take great pride in the quality and performance of our products. We offer our sincerest apologies to any customers who may be inconvenienced.

Phenomenon
In rare cases, when shooting still images or movies with the PowerShot IXUS 175 / ELPH 180 / IXUS 177 compact digital camera, the AF function on the camera does not operate properly, and focus is not achieved in the captured image or movie, even if the AF frame is displayed

If the camera has a black marking on the inside of the battery cover, as shown in the image below, this indicates that your camera has been checked and the issue has been corrected. 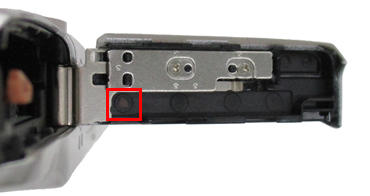 Market Support
If the camera meets the serial number criteria listed above and does not have a black marking on the inside of the battery cover, and if the phenomenon occurs and is confirmed by Authorized Canon Service Facility, we will repair the unit free of charge. If you own one of the affected cameras, please contact our Customer Service Facility.